“It is so loud sometimes I cannot hear myself think”: that is what one Accra resident tells me in response to the noise in their neighborhood when the team and I approach them to discuss installing air and noise pollution monitoring equipment on their property.

Focus on noise pollution in sub-Saharan African (SSA) cities as a public health risk is relatively new, and mostly from a combination of efforts by local governments and citizen groups. In recent years, there has been increasing attention to another form of pollution in African cities, namely air pollution, and how to best reduce the current harmful levels. However, up until the 1990’s most of the attention was still in rural areas and almost entirely on household cooking/ heating with biomass (e.g., wood) fuels.

Global estimates of air pollution of a specific nature (fine particulate matter air pollution (PM2.5)) show that levels in SSA are well above those in high income North America and Western Europe and less than 10% of SSA cities are meeting the World Health Organization guidelines for what is considered a healthy threshold (10 micrograms/meters cubed). It is a similar story for noise. The limited information we have suggests that noise levels are most often higher than in high-income cities. As well, the sources of noise go beyond road-traffic and are much more diverse and localized, including road-side sales, religious and cultural activities, music shops, small-scale industry, among others (Figure 1). For example, a recent article in The Guardian highlighted how ‘open-air’ religious activities (e.g., on the side of the road with a loudspeaker and microphone) are a major source of noise in Accra, but the government has done very little to regulate these actions due to the politics around religion in the city. 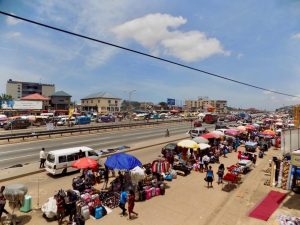 Example from one location in Accra, Ghana where there is a high concentration of noise and air pollution sources including road-traffic, human density, commercial activity, road-side cooking, road-side loudspeakers (for call to prayers) and road-side ‘open-air’ religious activities.

Accra, Ghana’s largest city, is one of the few SSA cities that has recently signalled that ambient air pollution is a priority area to tackle. The city recently announced some initiatives through the international BreatheLife campaign to improve air quality to meet the goals set out by the recently published Air Quality Management Plan for Accra. Noise has had less policy attention than air pollution, however, the Ghana Environmental Protection Agency (EPA) has taken some steps to try and reduce levels. For example, the EPA set nation-wide (‘not currently enforced’) guidelines for noise and has held meetings in various neighborhoods to brainstorm actions that each community can take to create quieter and healthier spaces for people to live and thrive in. Despite the minimal government attention to noise, it remains a major concern for the urban residents of Accra as annoyance to noise levels (often from religious activities) are consistently the number one citizen complaint received by the Ghana EPA each year.

Pollution policies are urgently needed in Accra to reduce currently harmful levels, but a lack of city-wide and high-quality data on where and when pollution levels are the highest/ lowest and what is causing pollution is a major barrier. To fill this information gap, the Pathways to Equitable Health Cities international consortium (equitablehealthycities.org) in partnership with local academic and societal partners in Accra have designed and are implementing an innovative measurement campaign to collect high-quality information on air and noise pollution and their sources across the Greater Accra Metropolitan Area (GAMA). In this campaign, we will cover more than 100 diverse locations which will make it one of the largest pollution measurement campaigns ever conducted globally. The Pathways team alongside local community members are setting up monitors for weekly periods to capture noise and air pollution (PM2.5) levels, collect audio for types of urban sounds, and imagery to count sources of pollution (i.e., count cars). 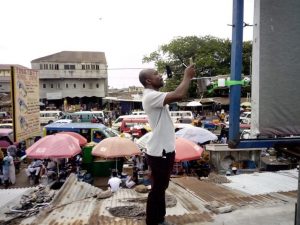 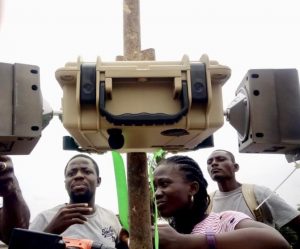 We are also drawing on a series of innovations to increase the amount of information and the type of information we can collect. We are using relatively inexpensive but robust monitors that can be left unattended and battery-operated for 7-14 day periods, are rugged (e.g., weather proof), lightweight, and are socially unobtrusive. A second innovation is our use of audio recorders and machine learning models to classify different types of sounds (e.g., birds vs cars) which could be an important predictor of health and wellbeing since not all sound is perceived the same way. A third innovation borrows from fields such as transportation engineering and is the application of small time-lapse cameras to pick out sources of pollution (e.g., count cars) and how sources vary over space and over time (weeks, months, years). 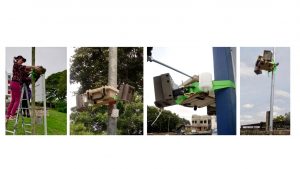 Many Accra residents have generously allowed us with their consent to install monitoring equipment for 7-day periods on their property. Monitors are secured tightly within weather-protected boxes onto poles/ posts (April 2019).

After one year of measurements, we will be able to model and map air and noise pollution and their sources across the entire Greater Accra Metropolitan Area. The maps will assist in strategic intervention and policy planning as we will be able to identify exactly where and when air and noise pollution is the worst, who is most affected, and develop plans to tackle pollution in these areas to improve the health and wellbeing of the urban residents.

Author: Sierra Clark is a PhD student at Imperial College London and a member of the Pathways to Equitable Healthy Cities group. Sierra’s primary research focuses on measurement and modelling of environmental pollution in low-income cities and translational research for policy formulation and implementation. More information on Sierra can be found here.

Photo permission: Anyone that is identifiable in images have given their consent for the use of their image to be published and shared in media related to the Pathways project.

WHO. Ambient air pollution: a global assessment of exposure and burden of disease. (2016).