Dhaka City’s overall development programme and planning are complicated by its multiplicity of stakeholders and actors working on improving poor physical and social infrastructure (e.g., education, healthcare, communication), housing and neighbourhood conditions, and addressing poverty and inequality.  This situation is further exacerbated by inadequate financial resources, poor administration, inefficiency, and a lack of cooperation and coordination among implementing agencies. In such a scenario, knowledge co-production and co-creation play an important role in building a healthy and well-designed urban city. This knowledge transfer, according to recent studies, supports transformative trajectories toward urban health equity.

To develop and refine relevant sectoral policy scenarios in knowledge co-production, BRAC James P Grant School of Public Health held a three-day series of knowledge co-production workshops in September 2022 relating to Ambient Lighting, Air and Noise Pollution, and Transport and Mobility. Through a systematic and iterative process of multi-partner engagement, the workshops aimed to jointly develop an action plan for co-producing knowledge on these issues, create and support existing links across institutions, researchers, and partners and identify and develop concrete opportunities for future scenarios.

Experts, researchers and policymakers from various sectors came together through the highly engaging workshops to debate and address the above issues and concerns, make recommendations, and suggest solutions.

Issues and Challenges: The impediments to implementing policies 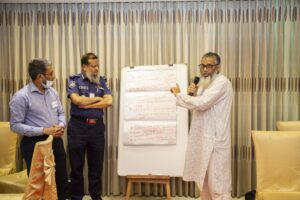 One critical issue raised by these well-informed viewpoints is the challenges in policy implementation despite the existence of policies, laws and regulations specified by the government. According to the participants, coordination and cooperation among all the relevant stakeholders, including government authorities and regulatory bodies, NGOs, academia, and civil society, are crucial for effective policy implementation. This entails the need to play their respective roles and responsibilities in resolving the problem.

Lack of evidence and Research

Policymakers and government officials who participated in the workshops also emphasised that they were unable to obtain a true picture of the problem at hand due to inadequate rapid responses from the public. If sufficient evidence is available through public response, it assists them in considering policy and regulatory changes and ramifications. The policymakers value and are eager to support good research. They are looking forward to the research institutions and academia to actively engage in generating evidence and large-scale dissemination of the research findings in identifying Dhaka’s issues and concerns and subsequently helping develop effective solutions. 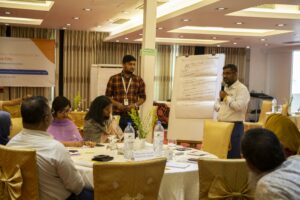 The workshop participants also recognised the problem associated with interferences from influential business and corporate bodies. The private corporations utilise political power and authority in the community to overturn the rules and policy implementation process to their benefit without considering the social benefits of such policies. As a result of their objections and protests, the policy implementation process is either delayed or altered, and often the regulatory bodies confront difficulties in putting policies into effect. To explain the problem, the stakeholders gave an example of the clean air act that could not be passed in 2019, despite widespread consultation and public support. Instead of the act, a set of Clean Air rules was enacted in September 2022. This political failure was attributed to the opposition from the industry (manufacturing plants, brick kilns, and construction) and business. On the other hand, the government authorities often reluctantly prefer guidelines over acts since they believe strict laws and regulations (penalties and enforceability) might impede the development programme and activities.

While discussing gendered accessibility and transportation challenges, experts emphasised the importance of involving women more extensively in the design of transportation systems, policies, and strategies. There is an urgent need for the enforcement of laws, their effective implementation, a bottom-up awareness approach, and the strengthening of complaint systems aimed at addressing the serious issues of sexual harassment, security, and safety in Dhaka’s public transportation. Also, the barriers to understanding the gender viewpoint and achieving sustainable development should be critically appraised. Effective activism through publications, forums and social awards to create knowledge and awareness on implementing laws is also a possible solution.

The Challenges to the Holistic Approach 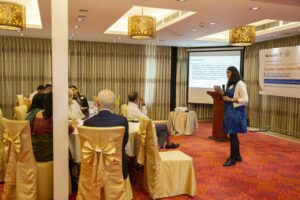 The representatives from the Local Government Division shed light on the challenges of adopting a holistic approach to making choices or developing policies and shared the difficulties with putting policies into action. When new regulations and policies are implemented, they may have a detrimental economic impact on specific groups of people, particularly the poor. For example, hawkers may lose their income to improve walkability and pedestrianism support. However, the chief guest of the workshop, an economist and a policymaker, argued that people learn to adapt and find new employment over time.

It was agreed at the end that people should therefore adapt and change their behaviour and mindset in response to technological advancements rather than being fearful of change. There would be benefits and drawbacks, actions and reactions, but the difficulty lies in effectively managing the fallouts.  According to the participants, the significant lesson is not that there are problems but that we must move forward by applying intelligence and perseverance to solve the issues. Solutions should be determined in an analytical form. The stakeholders should collaborate to execute the combined strategic push in small, medium, and large steps. Co-creation of knowledge is essential. Despite the challenges, designing the research and interventions with potential users, practitioners, relevant stakeholders, and policymakers may aid in implementing policies and solutions.