Human and nature are two inseparable entities that have interchangeable interactions at every level of life. The negative consequences of abandoning nature are increasingly being recognized by countries around the world as the effects of segregation from nature on human health become more clear. Therefore, cities worldwide are now trying to secure a portion of natural greenery or open space to maintain the good health of their residents.

Green spaces in urban areas are defined as any areas of land with vegetation, such as forests, grasslands, parks or even crop fields. As urban greenery is a centre for physical activities for people of all ages, it helps children play and enhances their mental growth and gives adults the opportunity to escape from their rigorous daily routine to enjoy the fresh breath of nature. It is also seen as increasingly important not only to improve people’s physical and psychological wellbeing but also to keep the city cool and combat air pollution.

What is going on?

While awareness is increasing regarding the importance of green space for human health, continued encroachment into these areas is common in the growing cities of South Asia. One example in this region is Dhaka city, which has shown an inadequate management of urban greenery.

Dhaka is one of the fastest-growing cities in Bangladesh, with high population density and multiple central business districts. It was ranked as one of the most uninhabitable cities globally and this scenario continues to worsen. There is a dearth of places to breathe fresh air in the city and people are preferring artificial infrastructures that do not bring the same benefits.

Dhaka city and its greenery

Dhaka city is a thriving metropolis with inadequate availability of green space for its citizens to escape its bustling environment. According to the United Nations Environment Program (UNEP) standard, the ideal city has at least 25% green space of its total area. Analysing the data provided by the World Bank in 2018 for the smallest administrative unit (i.e., ward), it was found that out of the 92 wards of Dhaka city, only one ward meets the standard with a 23% green space coverage, and three wards hardly reach 10% coverage.

The per capita availability is not even close to the recommended health standard, which should be 5 square metres according to the World Health Organisation (WHO). Eighty-three wards among 92 wards have less than 0.0005 square metres green area availability per person considering the total population in 2014. Moreover, the distribution of such land features is beyond reach in many wards. The important residential areas do not have sufficient green space coverage and even when public parks are accessible, they are not always well-used because of their poor quality.

Bare lands which were left with green grass or crop cultivation fields are being occupied by new constructions as urbanisation continues within the city and up to the city’s periphery. Nowadays, green or bare spaces can hardly be included or maintained in educational institutions and government official locations. 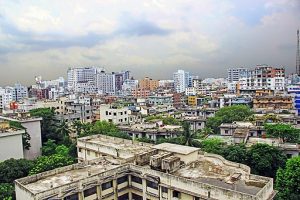 In the last 40 years, the green space coverage has dramatically decreased in the city landscape, whereas built-up areas have increased. New residential areas are developing in terms of construction rather than nature-based landscapes. Many essential government projects are being launched: flyovers, metro rail, and roads are increasing around the city, while initiatives to increase green space are rare. However, some constructive practices can raise hopes of positive and impactful changes.

The exercise of roof gardening for example has widely increased in recent times. Roof gardens are scattered and infrequent but very effective to ensure personal access to greenery. Although a rare example, building multiple small parks for the residents in the northern part of the city (i.e., Uttara) demonstrates how green space can be provided in transitional peri-urban areas.

Going forward, changing policies requiring people in high-rise buildings to maintain parking spaces could contribute to more available space for parks and greenery. At the same time, the government and responsible authorities should undertake strategies to maintain a healthy amount of green space in the newly built-up areas. Green space should include parks, open fields and trees to offer the residents enough opportunity to maintain their physical and mental health. Also, Rajdhani Unnayanv Kartripakkha (RAJUK), Dhaka North City Corporation (DNCC), and Dhaka South City Corporation (DSCC) should impose legislation to promote roof gardening in existing and under construction buildings around the city.